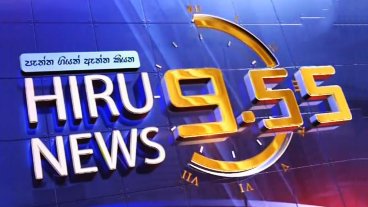 COLOMBO (News 1st); Former Minister & MP Dr. Harsha De Silva has suggested to the government of Sri Lanka to restructure its debt. Speaking in Parliament on Wednesday (23), the opposition lawmaker said some businessmen are facing issues because banks are not issuing dollars for payments. He further ...

COLOMBO (News 1st); A list of 17 LTTE suspects currently in detention and eligible for release, has been handed over to President Gotabaya Rajapaksa. However, State Minister Lohan Ratwatte speaking to News 1st said the list is yet to receive approval.]]>

Suez Canal and Ever Given ship owners reach deal on compensation
Posted on Wednesday June 23, 2021

Egyptian officials and owners of the giant Ever Given vessel that blocked the Suez Canal earlier this year have reached a preliminary deal over compensation, according to the ship’s representatives. “Following extensive discussions with the Suez Canal Authority’s negotiating committee over the...

Wearing military uniform while not being military is illegal – Police
Posted on Wednesday June 23, 2021

COLOMBO (News 1st); Police Spokesperson Senior DIG Ajith Rohana confirmed that it is an offense for anyone who is not in the military to wear or be in the possession of a military uniform. He said by doing so, one is committing an offense punishable as per the Penal Code and the Sri Lanka Army […]...

Pfizer vaccine to reach SL in July; will be used as 02nd dose for AztraZeneca
Posted on Wednesday June 23, 2021